A dinner jacket (British English) or tuxedo (American English, also colloquially known as “tux”), dinner suit, or DJ is a semi-formal evening suit distinguished primarily by satin or grosgrain facings on the jacket’s lapels and buttons and a similar stripe along the outseam of the trousers.

The suit is typically black or midnight blue and commonly worn with a formal shirt, shoes and other accessories, most traditionally in the form prescribed by the black tie dress code.

In French, Italian, Portuguese, German, Polish, Russian, Turkish, and other European languages the jacket is called a smoking and in Spanish it is an esmoquin. This name is in reference to the jacket’s early similarity to Victorian smoking jackets.

The earliest tuxedo jackets were of the same black material as the dress coat with one, two or no buttons and a shawl collar faced in satin or ribbed silk. By the turn of the twentieth century the peaked lapel was equally popular and the one-button model had become standard. When trousers were sold with the jacket they were of the same material. Edwardian dandies often opted for Oxford grey or a very dark blue for their evening wear.

By World War I, the grey option had fallen out of favour but the “midnight blue” alternative became increasingly popular and rivalled black by the mid 1930s. Notch lapels, imported from the ordinary business suit, were a brief vogue in the 1920s. A single stripe of braid covering the outseam on each leg was an occasional variation at first, but became standard by the 1930s. At this time double-breasted jackets and white jackets became popular for wear in hot weather.

Colour, texture and pattern became increasingly popular in warm-weather jackets in the 1950s. In the 1960s, these variations became increasingly common regardless of season or climate. Notch lapels were once again a fad. By the 1970s, mass-market retailers began offering white and coloured versions of the entire suit to its rental customers. The 1980s vogue for nostalgic and retro styles returned evening wear to its black tone. Notch lapels returned for good in the 1980s, and in the 1990s tuxedo jackets increasingly took on other traits of the business suit, such as two- and three-button styling, flap pockets, and centre vents. These trends have continued into the early 21st century and midnight blue is now once again a popular alternative.

Custom made tuxedo tailoring service in Dubai provides the perfect solution for typical occasional dresses toglamorize your personality. Tuxedo wear is an idyllic solution for the occasions when you need formal dresses to enhance the beauty of the events. SUITS AND SHIRTS tailoring in Dubai also provides the quick most delivery service of bespoke tuxedo to the customers because we have a proficient teams of skilled tailors that work round the clock and work hard to the utmost satisfaction of the customers.

For some special occasion you need a special dress which you do not wear anywhere else for such moments you need tailored tuxedo to be prepared by an expert tailor who knows well about the delicate aspects of tailoring. Weprovide this service in Dubai at the height of expertise level.

The events that require formal dresses can be obliged by Tuxedo for it is the only perfect solution for this purpose. The modern and trendy people long for a well-tailored dress that appeal and fit their body shape dreamily. Yourtuxedo suit tailor search ends here. Keeping in view this basic element we provide splendid service of custom tailored tuxedo to our customers. The Tuxedo prepared by our company not only looks graceful on your body but even it looks gorgeous while hanging in your wardrobe.

This is most worn Tuxedo. The shawl collared tuxedo looks perfect for all occasions. It has a curved shape and looks very smooth from the start to the end. Tuxedo can also be done with the French Lapel.

Very elegant yet simple this type of Tuxedo is prepared without satin and generally this is suitable for daytime occasions.

Among all types of Tuxedo tailcoats are very popular and various patterns and designs are seen in this style of Tuxedo. This is the type of coat in which the fore portion of the coat is cut down.

Suits come in various designs one of them is Double breasted Suit. 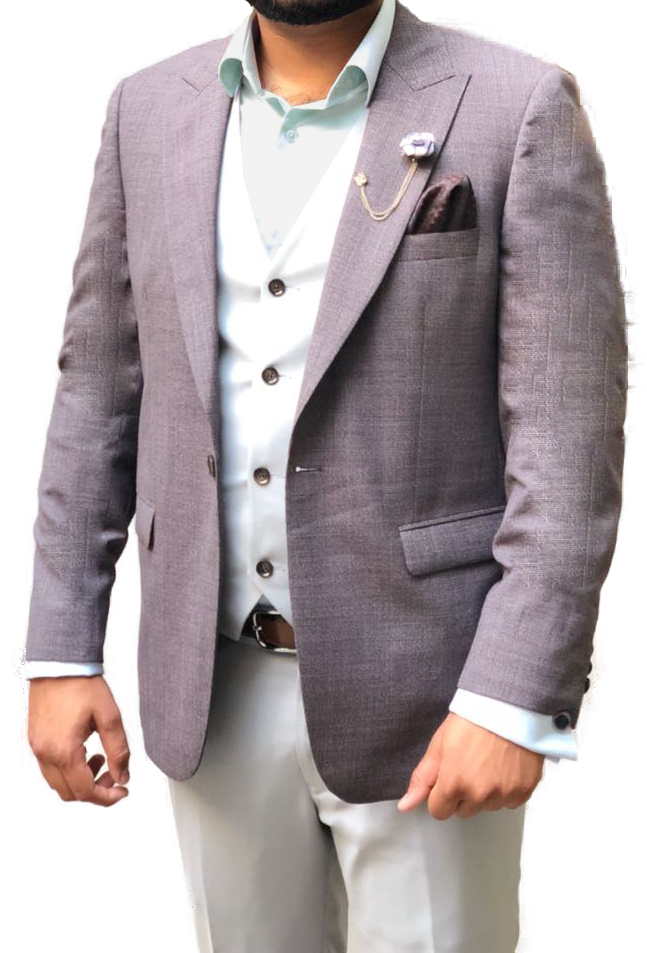 Chat with Suits and Shirts